What a weekend, a great level of talent and an amazing turnout. It was awesome to see all the support not only for the top riders but for everyone taking part.

Towed by the Super Big 230 Air Nautique, there was no excuses for saying the wake wasn't up to the task...

The competition side was again a noticeable step-up on last years levels, seems that every year the younger generation keeps on keeping on, it’s certainly something to show for the countless sets that both parents and friends tow each and every weekend over the summer.

The Open men’s section saw some epic riding as normal. Nis Gibson did what we all new he would do some day and stomped one of his trade mark runs and managed to push Geoff Weatherall into 2nd place with Paul McGuire taking the 3rd podium place, from looking at the score sheets i can openly say I’m glad i wasn’t trying to judge this division, the top 6 were a matter of points apart.

Open women’s again little old Andrea Fountain snuck out another national titles (yes, her 10th in a row), but again she was made to bring her A game as Charlotte Broadbent keeps on chipping away at her, a very close 3rd was Katrina Pollard, I’m already looking forward to next years Open Women’s battle.

The Junior Men’s section again was a display of the up and comers that will be snapping at the heals of the open men’s in the close future, James Tingey managed to take the division from Guy Robinson with Michael Parkes 3rd and Taylor Walters who has stepped up to take on the big cats in 4th, from looking at the score sheets there was some amazing riding and to see the top 4 riders within 3 points of each other shows the talent and just how tough a division this is.

Not to be outdone, the Junior Women battled hard and showed that we wont be short of talent should our open women head out to pasture, the recent podium at the World Champs has been backed up by taking out the division, well done Sophie Schollum, and following closely behind were Anae Dixon and Danielle Carlyon

Our adopted POM, Matty Simpson managed to make it 3 in a row and took out the Masters section over Tommy Dillon and Cameron Powell.

Mixed men was again a display of talent, always a tough division and this was no exception great to see the guys battle hard and walk away as mates, Nigel Harding walked away with the spoils and David Evans & Michael Brown were right behind – next year huh guys ?

There was a hardcore crew of Groms and Juniors who turned up in force again, as the breeding ground for the future of Wakeboarding New Zealand talent it was humbling to see such a turnout, the future is certainly looking good with record numbers of younger riders, a real testament to the countless hours that parents and the WNZ coaches are putting into developing young talent, it’s certainly something that we all should be proud of.

Personally my highlight of the weekend was seeing the BIG man of New Zealand wakeboarding take top spot in the Veterans Class, you may know him as Mr Raley or the Mayor of A Town, but to all he is now, Sonny Wakeboard 2010 Veterans National Champion, the expression on Sonny face walking to claim the trophy was nothing short of moving, one can only image what he felt like, to win a national title would be awesome but to do it over the likes of former world and multiple national champion Gavin Broadbent would have made the feeling even more special, great to see old man JP (Jimmy Palmer) throw down a decent competition pass and sneak into 3rd place, rumour has it that Sonny is not heading back to defend his title next year, apparently dropping from the heights he achieves on his raleys has taken a toll on his petite wee frame, I personally hope that he reconsiders this as the sight of the big man at full stretch above tower height is something i look forward to seeing every time he competes.

To spend 2 days at the national champs seeing the on water rivalry complimented by the off water friendships (all be it a little frosty when the crew from  the north island kept hold of the North South Trophy – again) is certainly something that our sport can be proud of and is what makes Wakeboarding so special.

I couldn’t think of a better way to bring the 2010 competitive season to a close, the dinner/prize giving and after party on site rocked, a couple of sleepy campers may say it rocked too long but hey, what a way to bring 2010 summer to a close – the excitement is already building for the 2011 season, hope to see a few “hard core” out on the water over winter in the coming months. 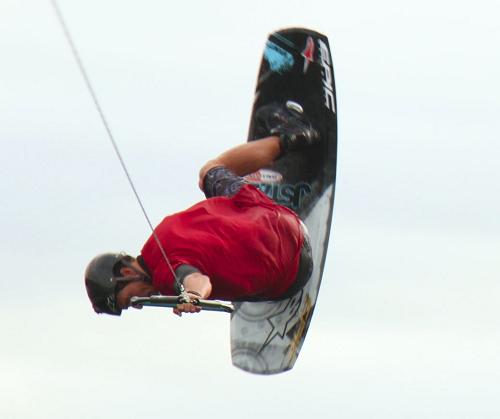 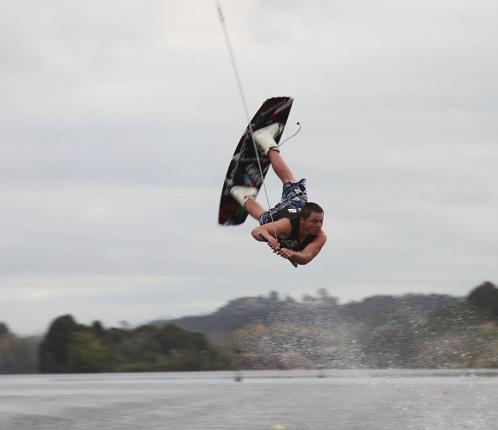 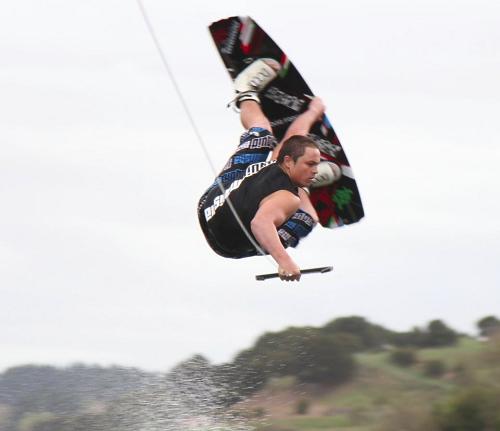 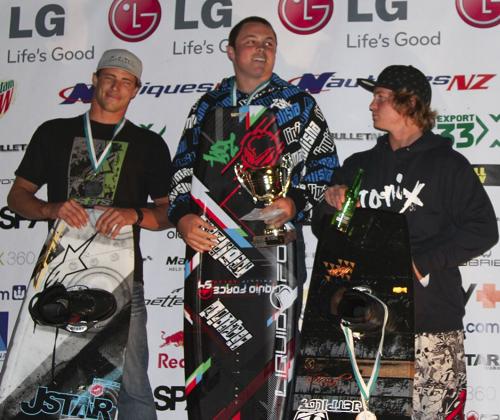 Awesome location right on the Strand in Tauranga provided a great setting for the comp put on by Daz Walters.

Salt water riding with the Bridge and Ships in the back ground was definately not what we're used too but the competition went well towed by the Epic with good conditions through out the day.

A super large crane just happened to be onsite so we hung our 6x3 mtr billboard sized banner off it...

Best weather for a competition yet, outstanding level of riding in all divisions, this event in Mango is really starting to become one of the best social get togethers especially with M-I-A holding the Wakefest on the same weekend!

2.1/2 year old Zak helped Dad find something in the Trailer... 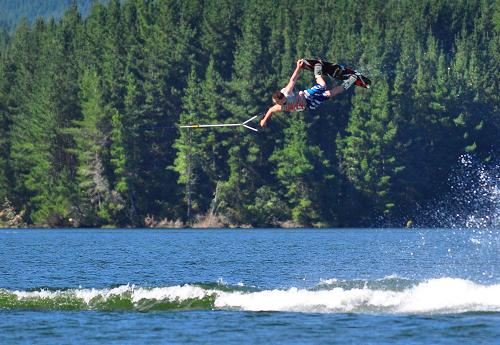 Another awesome day if you were a wakeboarder with everything and anything to do with wakeboarding on display. Boats, Boards, Bindings, Wakesurfers, Ropes, Handles, Vests and more from pretty much every brand on the market were there.

The X-Air crew made a few days of it and did a Tower install the day before in Lake Tarawera before riding and wakesurfing the rest of the day there, staying the night in Rotorua, then heading across to Pairere early the next day for the Demo Day. 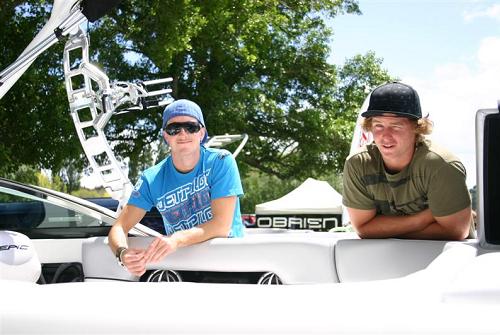 X-Air sponsered prizes and had customers turn up for the WNZ North Island Premier of "Global Warning" the latest Wakeboarding DVD from Ronnie Romero & David Cervenka.

This flick included our own Jeff Weatherall plus a lot of the global stars of wakeboarding. 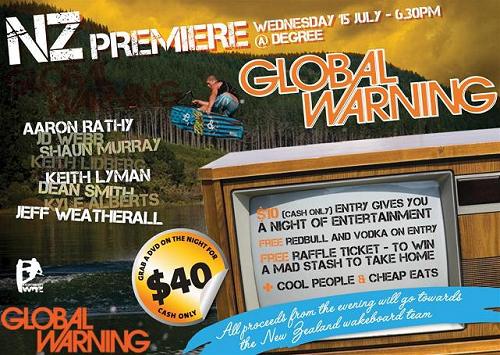 X-Air was proud to support the Elbow Ski Club and be part of the 50th year celebration.

We turned up on Thursday afternoon to super glassy conditions and a little bit of rain, got a set in each before dark. Friday was raining hard all day until about 5.00pm when we saw the X-Star drive past on the way to the ramp... The rain had fianlly stopped, no other boats except us and the X-Star...and perfect conditions for a ride!

The X-Star was ballasted hard both days of riding and the extra wide monster wake caused some problems for the riders...

Epic riding in the finals saw Brad take it out from Nis in the Open Mens.

Adam from our own X-Air placed 2nd in the Masters, Ki Barker easily took it out with some big inverts and super style to his riding.

Andrea Fountain took out the Open Womens from Elly Ward. 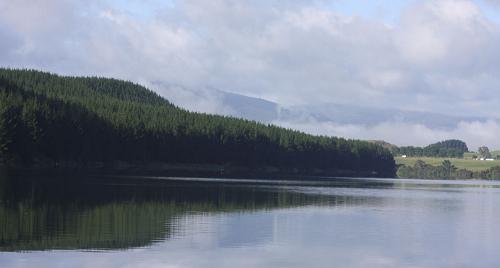 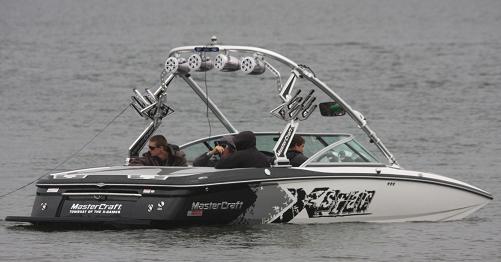 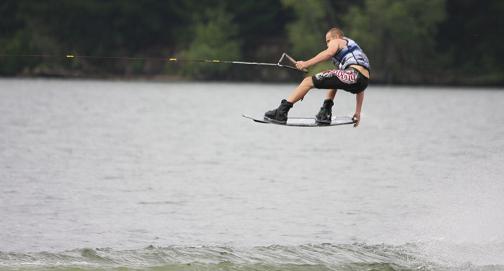 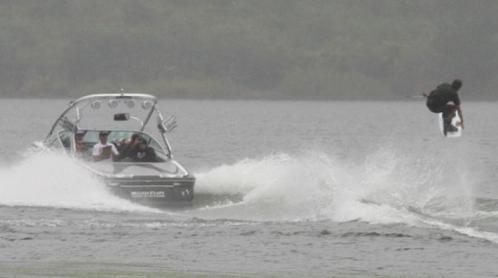 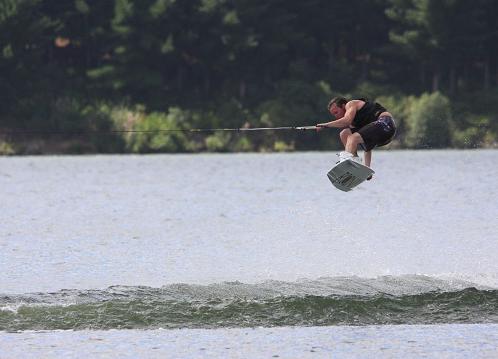 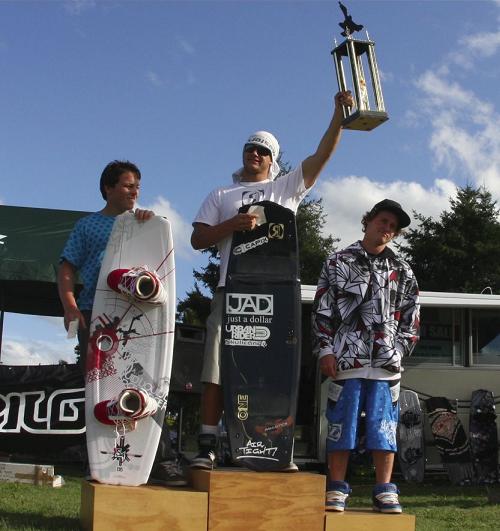 X-Air was there with our Trailer and sponsered 20 x Mastercraft Slide N Glide Caps as prizes.

The competition was towed by the Mastercraft CSX and Paul Maguire took it out from Nis Gibson. 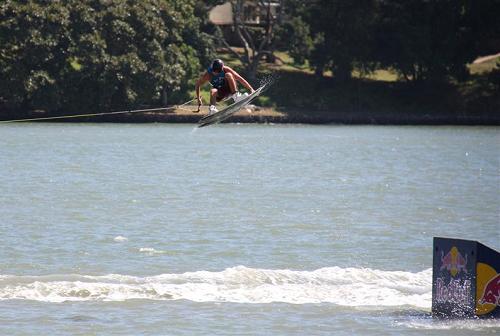 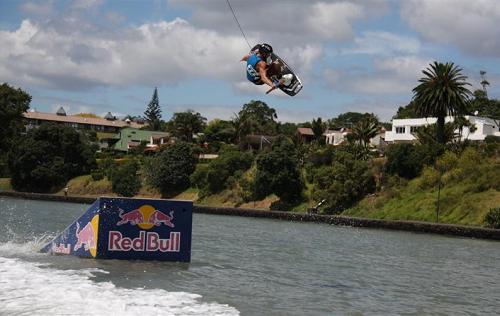 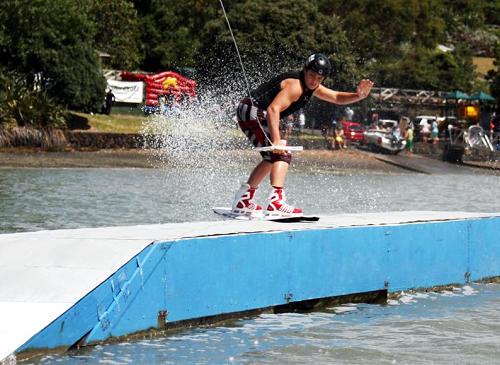 X-Air paid $250 cash sponsership money to be at the event and supplied prizes of sportsbags over the two days.

Linda and Zak came down for a family weekend away, thanks Daz and Mastercraft for putting on a great weekend!

The weather on Saturday for qualifying was average but sunny and glassy conditions on Sunday saw some epic riding all round. Wind stayed down most the day and the sun was beeming with a heap of spectators laxing and enjoying the riding.

The level of riding has gone through the roof, we saw Paul Maguire kill it in the finals with a dream run in the open mens, second was Brendon Ellis. Courtney Bertram took top podium for the mens Mixed going big and stomping the shiz out of all his tricks.

In the Jnr mens, for the 1st day and both heats Guy Robinson from South Island laid it all down claiming top seated for the finals, but James Tingey from Club TePuna found his feet behind the 2009 XStar and set the level from the word go to take 1st place pushing Guy to 2nd.

Jnr boys was the closest yet, Daniel Tingey and Regan Carlyon both have stepped up the tempo to take Talor Walters down, every heat was so close but the finals was the hottest, Regan landing his TS Backroll but falling on his TS180 gave Daniel who laid down some big air tricks to claim 2nd place.

Jnr girls we saw Sophie nearly stomp her huge TS front roll but just slide out, up against two new comers to the scene Gracey Monk and Morgan Haakma.

And a first ever Grommet Girls division, never thought I'd see a under 10 girl through a huge wake to wake 180's, but Lucy Richards who took top place through one in the finals landing it but just coming unstuck. keep it up girls and we hope to see you girls stay in the scene.

The weather was perfect, sunny and glassy conditions saw most of the spectators on the water with their boats. There were new Nautiques and Mastercrafts on display. X-Air was there with our Wake Challenger V Drive and Trailer and half a dozen of our customers turned up with their boats equiped with X-Air gear.

Justin in the Red Bull Hummer was there once again cranking out the tunes http://www.redbullspecialops.co.nz/events/a-weekend-of-wake/

Thanks to Ralph and the team at Wake NZ for organising a great day! 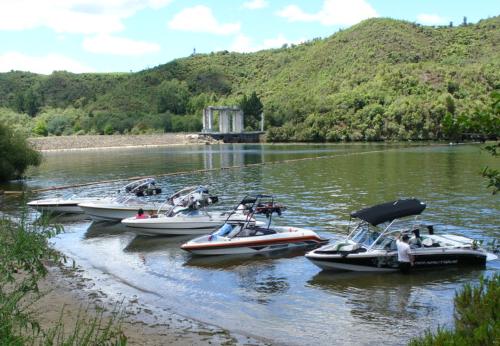 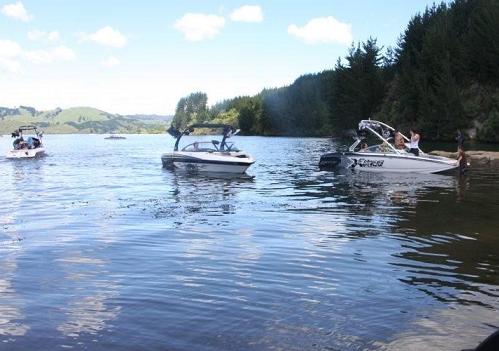 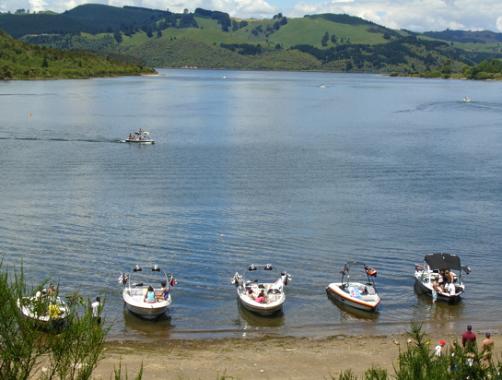 X-Air paid $750 cash sponsership money and supplied prizes of caps and jackets over the two days.

The Red Bull Hummer was onsite cranking out the tunes and spectator numbers were large with good viewing of all the action from Horohoro Domain.

Jeff took it out from Brad in Opens Mens

Jamie placed third in Mens 1 which was a great effort for his first ever competition.

X-Air had our trailer onsite and supplied a gear bag to every rider that entered the event as well as prizes of caps and jackets over the two days.